Dubbed one of a coterie of “favorite Brazilian guitarists” by Villa-Lobos magazine, Alvaro Henrique’s mission is to connect audiences with a world of emotions and stories that spark ideas, conversation, and meaning.
Known for both the humor and drama of his performances, along with his engaging speaking with audiences from the stage, Henrique has toured 15 countries and has released 2 solo albums and a DVD. Henrique’s recital programs typically include a host of plucked instruments covering a fascinating range of history and cultures. He plays the early vihuela, the Baroque theorboed guitar, the romantic guitar, and of course the modern classical guitar. His flexible repertoire allows for programs that can mix 5 centuries of music and cultures. Alvaro Henrique has also premiered works by a number of composers such as Mario Ferraro and Ernest Mahle. He plays works by Villa-Lobos, Scarlatti,Tárrega and Guerra-Peixe as well as surprising transcriptions of works by Tchaikovsky and Stravinsky As a soloist with orchestra, Henrique has performed in Brazil with the Orquestra do Teatro Nacional Claudio Santoro and the Universidade Federal do Rio de Janeiro’s String Orchestra, as well as in Finland with the Vaasa Sinfonietta. He has premiered 5 concerti, and worked with conductors Julio Medaglia, Ville Mankkinen, and Angelo Cavallaro. With a special interest in art for social change, Alvaro’s projects have included commissioning works centered on social issues. Examples include Jean Goldenbaum’s concerto May All Dictators Fall (inspired by the Arab Spring) and Jorge Antunes’ Brasilia 50 (a fifty-movement work for guitar and pre-recorded sounds which describes historical events that took place from 1960 to 2010). Committed to helping audiences find meaningful connections to music, Alvaro frequently presents community engagement and educational concerts at schools, community center and senior residencies.

Alvaro Henrique is president-founder of the Associacao Brasiliense de Violao (BRAVIO) and the first South America Guitar Society partner of the Guitar Foundation of America (GFA). Dedicated to promoting the interest in the instrument and helping his fellow guitarists, Henrique has—since 2005—organized more than 100 BRAVIO events for colleagues including concerts, soirees, lectures, masterclasses, festivals and competitions. From 2010 to 2012 he taught at the Universidade Federal de Uberlândia, and during this brief period had 12 undergraduate students awarded in competitions, playing in important cities such as Salzburg (Austria), and/or recording CDs distributed worldwide. Besides teaching, has also given lectures on career planning, musical expressivity, and study technique for musicians. Alvaro Henrique holds a bachelor’s degree from Universidade de Sao Paulo, a master’s degrees from the Universidade de Brasilia and a Kunstliche Ausbildung degree from the Hochschule für Musik Nürnberg (Germany). He studied with Franz Halasz, Alvise Migotto, Bohumil Med, and Zilmar Gustavo Costa. 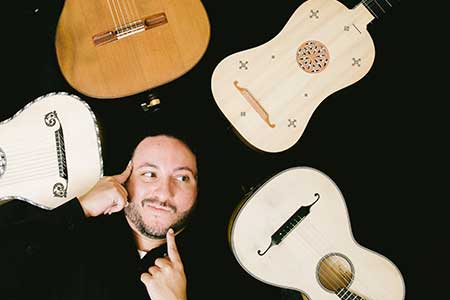